Having spent the week working near Burlington, Vermont, I decided since I was leaving early enough on Thursday to get a quick hike in. I found on the All Trails app Mt. Philo (second link) which was listed as a .2 mile hike. I think that was as the crow flys because there was no way that even close to .2 miles unless you went straight from the parking lot to the summit. I opted to take the split part way up and followed the path called the Devils Chair trail. Lots of ducking under boulders and trees, plus at times the trail was barely wide enough for one person. From the top you could see over Lake Champlain into New York. They also use the road up for one weekend in the fall for a Hill Climb, where you can race your car up to the summit. On the way back I took some back roads through the Adirondacks and encountered snow, a decent amount, in the higher elevations. The photo below is of my track up and down the mountain. Click on it to see the rest of my pictures. 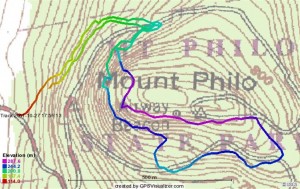