On Wednesday, over 50 years of Wheeler history went up in flames as the former home of Bill & Kay Wheeler (my Grandparents) burned down. No reports yet on what caused it. Originally built in 1910, it was purchased by them in 1954, and they lived there until Papa passed away in 1991 and Nana moved out in 1999. My Aunt Colleen owned the home till 2007 when she sold it to the current owners. Many of the Wheeler children have fond memories of the years growing up visiting and playing in the house and yard. Click on the pic below for more from the fire and aftermath…. 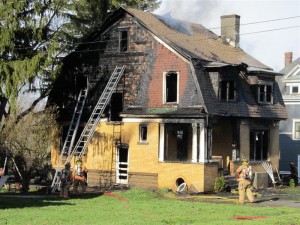