On Saturday I went way north in the Adirondacks with a few people from SAOAC to hike up Mt. Adams, one of the more difficult firetower hikes, but most enjoyable. It’s called an “Indiana Jones” hike because it starts out going across a swinging bridge over the Hudson River, then crossing Lake Jimmy on some planks. Only issue, Hurricane Irene took out the bridge, and the water level in Lake Jimmy was higher than normal. So the boots came off and we forded both areas. After that it was just an “easy” 2+ miles up the mountain, only took me about 3 and a half hours to reach the top. The interesting thing is the observers cabin is located near the base of the mountain, not on top like some of the others. Some light rain, just hard enough that you had to decide to wear a rain coat or not. I decided it was a good idea. Once I reached the firetower I only went up enough to get above the tree line and get some pictures, since the others had already been up top and were heading back down.

Afterwards, we went about 1/2 mile further down the road to check out the abandoned mining village “Adirondac” (aka Tahawus) . The notable buidling here is what we called the Teddy Roosevelt house, it’s where TR was staying when he found out President McKinley was shot. On the way out, we stopped at the old blast furnance. I’d seen pictures but hadn’t realized just how large it is. There’s one picture among the ones you can see by clicking on the one below where I’m standing in one of the archways. All in all, even though it was a long, wet day, it was a fun trip overall. 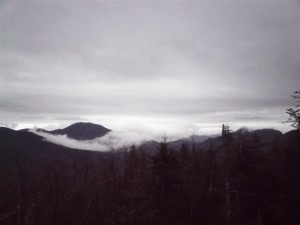 One thought on “Mt. Adams and the Tahawus Tract”