On Saturday, a group of nine of us from SAOAC went up to North Creek, NY and Gore Mountain to do the hike up the Schaefer Trail and see the fire tower at the summit. The parking lot is by a public beach for the area, Grunblatt Memorial Beach, which was closed. 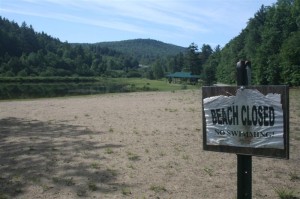 Once everyone arrived, we started out.

The majority of the trail was a nice walk through the woods, elevation change wasn’t too bad, and it followed Roaring Brook, which has lots of waterfalls along the way.

Eventually we came across the reservoir.

After this point is where the hiking trail starts to intersect the ski trails, because of this, hiking is not allowed during the winter.

Soon we break out of the woods and simply follow the maintenance road to the summit. One benefit is now we’re getting some views out towards the other high peaks.

So a little more than four hours after starting (more on that later) I reached the summit and fire tower. The tower itself is now used for communication equipment, so no climbing is allowed.

So, back to why it took so long to summit. I was staying in the back because we had two people that do not hike very often, one even said it was the first time in four years. I stuck with the two “newbies”, just kept encouraging them, telling stories of some of my hikes when I first started getting back into it, telling them to go at their pace, stop whenever they want for however long they want. But, in the end, one girl ended up stopping for good about 1/2 mile from the warming hut. The rest of our group was heading back down, so they stayed with her while I got up to the top to get some quick pictures. Once I arrived back down where they were, it had been determined that possibly she may have heat exhaustion, so the decision was made that 1/2 the group would hike over to the gondolas, since they were running, to see if they could send up a vehicle to bring her over there. About 20-25 minutes we got the phone call that a vehicle was on the way. Once it arrived, we all piled in to meet the rest over at the gondolas. One gondola ride down (fun) and we all enjoyed some food and drinks at the lodge.