Since I wasn’t working, on Tuesday I met up with a couple guys from the Adirondacks High Peaks forum to head up Algonquin, Iroquois and maybe Wright if time permitted. One guy, Gerard, is from Brooklyn and having read about his previous hikes, I knew he hikes about my speed (slow). Since it was going to be an all day hike, I drove up the night before and stayed at Tmax-n-Topo’s Hostel, just about 1/2 down the road from the entrance road to the Adirondack Loj.Got up early, (4am) because we wanted to get an early start on the trail. After a light breakfast, on the road to the trail head. 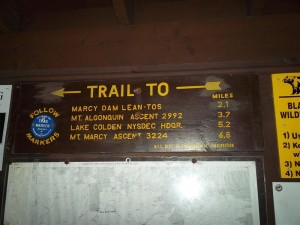 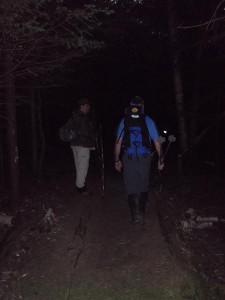 We made sure we stayed hydrated throughout the day….

The trail alternates between rock hopping…. 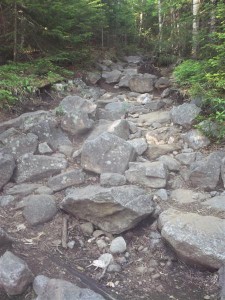 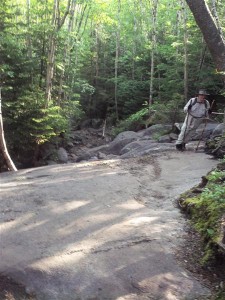 There wasn’t much water flowing over the falls, the picture doesn’t do it justice for seeing it in person. In the spring with the snow melt it must be much more impressive. From one section of the trail you can see this rock formation across a small col.

Impressive, but short when compared to the other mountains around us. Soon we reached the junction with Wright Peak, just one more mile to go of rock hopping and slabs, but more steep now than before, until just before the summit. 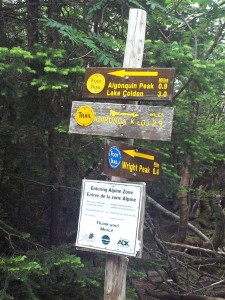 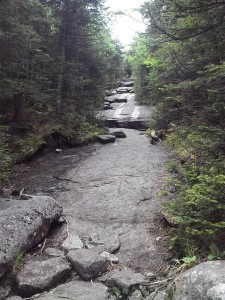 As we climbed, we couldget some decent views over to the summit of Wright, through the the trees.

Soon we got our first view of the destination, and a warning… 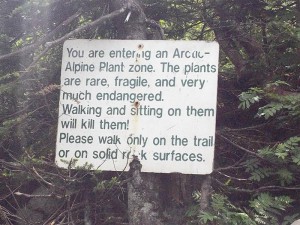 At this point the clouds have been increasing, and on the hike up it was interesting to see them hit the summit, break apart, and go up and around the peak of Algonquin. Downside of this is it was blocking our views of the other summits. Also as we got above the tree line, you start following yellow blazes and cairns to the summit.

After Ed telling me several times to go ahead, I decided that I should. I quickly got to the summit where one of the stewards was there, he told me a little about the vegetation, etc, and pointed out the summit marker. I got a quick picture of it, 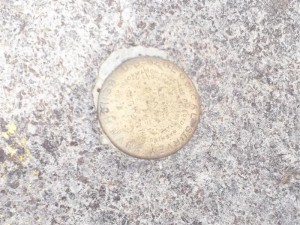 then asked which way to Iroquois. He pointed and mentioned they were painting the blazes that day so they may be still wet paint and to be careful. I thanked him and headed south. Met up with three more stewards on the south face heading down, one noticed my Buffalo Bills shorts and we talked for a couple minutes. Got going again, and minutes later got to the sign for Colden/Iroquois. Ed and the stewards warned me to keep to the right here, and it also helped that someone scratched Iroquois with an arrow towards the herd path. 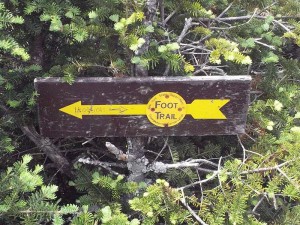 A little bit down the path and I came across the bog/swamp I’d seen mentioned on some trip reports. Poke at it with my foot cause i wanted to see how it was, and it was like pudding. There was a muddy path going around to the right so I followed that.

After about 20 minutes from Algonquin, I arrived at the summit of Boundary. Found a rock on top where I stopped for a few minutes to eat/drink and look around. I could see the stewards on the side of Al still painting, and I’m sure they could see me. Eating done, and back on the trail.

After a little while I hit my first obstacle on Iroquois, a rock face. I could see a blaze halfway up it so I scrambled up. But then I was stuck. I could see three ways up from where I was, hard, hard, and not as hard.  (Note, the picture below I stole from a previous trip report from Trail Boss. My pictures were not clear enough due to the cloud layer. The two red circles I added. I believe this location is the lower of the two circles.) 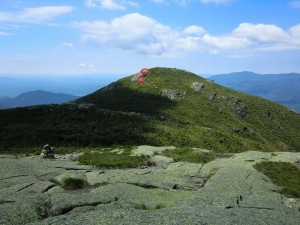 After a few minutes, I ended up deciding to take the not as hard way, by taking off my pack, throwing it up on top, and kind of jumping/rolling my way up on top. Pack back on, and I kept going.

Just a few minutes later and I was almost there! But there was another rock face to get up. (the upper red circle in the picture) I could see by the dirt and pole marks the way people went up, but I couldn’t figure out how. I must have stayed there 10 minutes, looking at different angles, going back down the trail to see if there was a way around it. I knew I was probably only 50 feet from the summit, but I did not feel comfortable attempting this section alone, so the decision was made to turn back. A couple hundred feet back down the trail I met up with the trail steward that was also a Buffalo fan. I told him my problem, and he said he’d take a look, he’d never been to Iroquois himself, but he was an experience rock climber, so maybe he could come up with a way. (I think they had seen me struggling and decided to have some one come over just in case)

(I apologize for the lack of pictures, at this point it was the last thing on my mind)

He ended up showing me what I had thought I would need to do, stand on one rock, reach up and under with my right hand to grab a crevice on the upper surface, then jump/pull my way up onto the summit. Success! I had a made it to the top! We looked around a little bit but could not locate the summit marker, so I at least got a picture of the cairn. 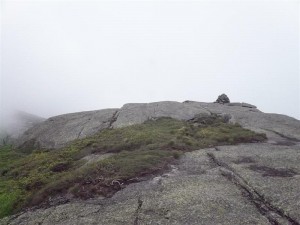 Headed back down, a little iffy on the first rock face of course. Approaching the second (the first one that I had jumped/rolled up) I started thinking about how i was going to get down it, when I see the steward heading off the the left. Turns out there was a trail going around and up. In my tunnel vision of following the blazes, I hadn’t noticed it on the way up. Doh!

On the way back stopped at Boundary for a little rest on the same rock as the way, taking in the views. Up and over Al, then onto the junction to meet up with the other guys. I was considering Wright, but one of my knees was starting to bother me, so i opted out. We reached the trailhead about 7pm, so in all, about a 14 hour hike that day. And now I have #3 and #4 done of the 46ers.

See all my photos from this hike at this link