Part 1 can be found here

Saturday morning, woke up about 7am and checked the weather radar. The storm that was to bring heavy rains appeared to split in two as it went over the Lake Placid area. But the high winds were definetly there, depending on where you were standing, if there was nothing to block it. Got showered, had breakfast, and headed off to Poke-O-Moonshine, about 40 minutes away. As for the name, from SummitPost…..

Unfortunately the name has nothing to do with home made booze or a famous mime that Canadians of my generation remember from TV. The name is actually a noble but poor attempt by early settlers to use the original Algonquin name for the peak “Pohqui Moosie” or in English “Broken and Smooth”. This name most likely refers to the smooth summit rocks and the large broken slabs on its SE side. The peak sits near the one main pass thought the high peaks area and as such was one of the few that had a first nation name as it was an important to them as a crossroads and meeting place for trade between the differing tribes of the area.

There are currently three way up, an old trail of 1.2 miles from a former DEC campground, a newer trail about 2.4 miles just south of the campground, and rock climbing up the cliffs. I opted for the new trail. All three ways though you park on the road, there is no formal parking lots currently. There was a notice at the trail head about a meeting with the DEC to try to keep both trails open. The DEC wants to close the old trail because it’s difficult to maintain. I’ll talk about my feelings on this later.

The new trail is the old jeep trail the observers would use to reach the summit, so most of it was a fairly easy incline.

Eventually we came across a section of the trail that appeared that the beavers didn’t want there. 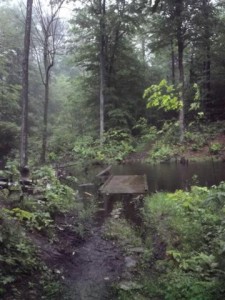 But they forgot to remove some trees from the creek by their dam so we made it across to the other side.

Eventually the new trail and old trail meet up at the location of the former observers cabin. The only thing left here is the fireplace.

Following the now combined trail, brings you to an opening in the trees and an overlook. Due to the weather, there wasn’t much to look at.

A few minutes later brings the first sight of the tower. It’s also where I caught up with Jeff, huddling under some brush trying to keep out of the wind.

Coming out of the brush/trees towards the tower, the full force of the wind hit me, the weather reports said winds about 25mph, and I believe it. I only went up a couple landings and got some pictures of the trees being blown by the wind. 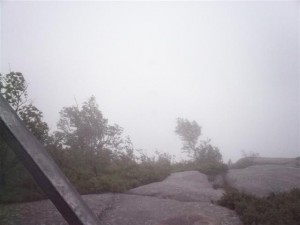 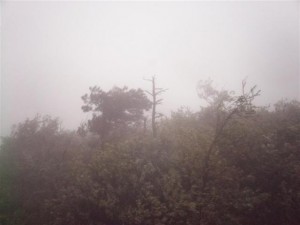 Heading back down we met up with another hiker at the observers cabin who was heading up from the old trail. Turns out he was from Syracuse also. We decided to take the old trail down to see how it was.

Here’s what I think about closing the old trail, I think they should. Lots of loose rocks, steep sections, even some areas that seemed dangerous if you were not prepared for them. Here’s a couple photos.

The next section goes along the cliffs that some people will rock climb up. 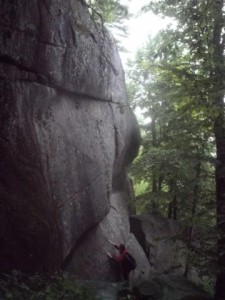 There’s also a lot of cracks, some large enough to walk right into. 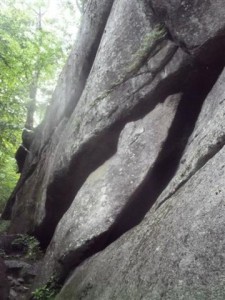 The other hiker, Matt from Syracuse, caught up to us at this point. Eventually we made it down to the old trail head. Using the old trail took just as much time going down, as it took going up on the new trail. 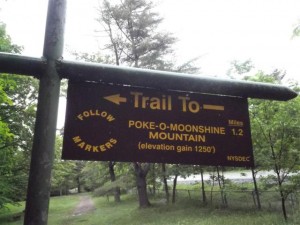 Next up was Belfry, the shortest hike of all the fire towers at under half a mile. 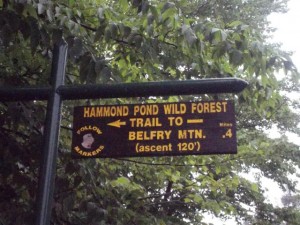 There’s no need for any gear, or excess water, heck, if you forgot something, you can jog right back down to your vehicle and get it. 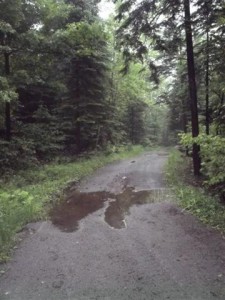 Once again, clouds and fog were an issue, not giving much in terms of visiblity, only a few hundred feet at times we estimated. 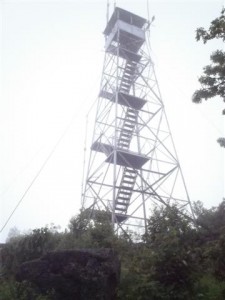 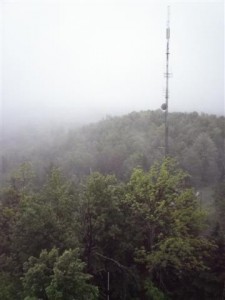 As much as I considered wanting to get Hurricane also, I decided I’d had enough of the rain and cold, plus the views from the top there are supposed to be awesome. So I may leave that for the fall, once the leaves change.

So with those three done, I’m now about the halfway point. Fourteen out of twenty nine done. Next up is Gore Mountain, one of the longest and highest of the fire tower hikes.